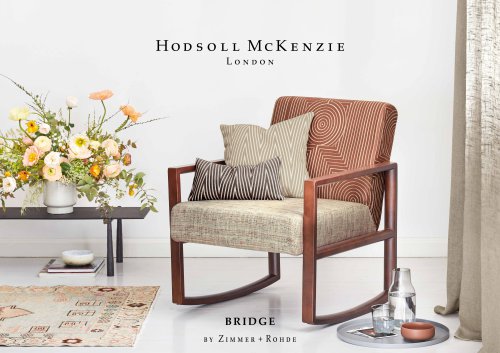 Hodsoll McKenzie has always built a bridge between ratio and temper, sophistication and a down-to-earth-attitude, Great Britain and the USA as well as British history and an international zeitgeist. With this collection we focus on these roots, the strong and seemingly contradictory characteristics of Hodsoll McKenzie. 'Bridge' harks back to Great Britain in the 1930s when artists and designers had been driven by the pervasive impact of industrialization which had radically changed means, esthetics and possibilities, but also has threatened delicate handmade processes. A new simplicity had...

T H E L O C AT I O N When we came across this beautiful mansion „Haus Steinfunder“ built in the 16th century in the Western countryside of Germany, we immediately knew that this could be a great location for our first photoshoot for Hodsoll McKenzie under new direction – not only because it looks so beautifully British. The half-timbered mansion with a stepped gable is fortified with a water moat in which two swans live. The well kept box tree garden leads to the nearby wood and whispers stories about love, heartache, bravery and dynasties. However, it was the vibrant mixture of the...

BETWEEN YESTERDAY AND TOMORROW LIES CONTEMPORARY The foundation of Hodsoll McKenzie lies in British design history and as such it is our task to anticipate what British style will stand for in the future. It is a permanent seek for the perfect mixture of tradition and innovation, of craft and simplicity, reasonable goods and storytelling alongside elegance and soundness. Thus in BRIDGE high performing and favorable upholsteries such as VERMONT and BERNICE are as integral as handwoven originals such as HOLLYHOCK. The way they perfectly sit alongside each other, as in this image, proves this...

STRAIGHT DESIGN WITH A CRAFTY SOUL MAKES THE ALLROUNDER It can be a sophisticated tapestry like in the image above. It can be a decorative cushion. It may be a confident curtain or even enhancing upholstery. Though VAN ALEN is an allover embroidery on a cotton ground, it is very soft and cosy. The geometrical design reminds us of the monumental yet playful Art Deco architectures of the first skyscrapers built in the US, such as the famous Chrysler Building opened in 1930 and built by William Van Alen. Pillows from left to right: H O L LY H O C K , N E U T R A , V E R M O N T , V E R M O N T...

In order to interpret the heritage of Hodsoll McKenzie in a fresh and cosmopolitan way the traditional flower print had to be rethought. Should we create bigger motives, smaller ones, more colorful or boldly black and white? Or perhaps we should not think about flowers at all but about botanicals in general and its broader meaning to British culture? Hence all print motives in this collection are dedicated to the flora and fauna that reside in Great Britain. ANDRESWEALD for instances is named after one of the oldest forests in UK, nearby Sussex, and shows a lush foliage fading away like on...

A BRIEF HISTORY OF THE HUNTING SCENE Since prehistoric times hunting is part of British culture and as such subject of British art, literature and textile handicrafts. As an exclusive sport reserved to royalty and the aristocracy, hunting was embedded in a number of strict rituals including the choice and the keeping of horses and hunting dogs as well as fashion and, of course, the procedure itself. So it was both a social event to show the prowess of the participants, observed and reviewed by the folks, as well as a distracting way of yielding noble food. Thankfully nowadays hunting...

INCREDIBLE INDIA Textile handicraft culture is an integral part of India’s history, be it as memento of the ancient times, as commodity of their colonial rulers or in form of the spinning wheel as symbol for their independence from Great Britain in 1947. And it is exciting to witness how Indian manufacturers nowadays combine their traditional techniques with new technologies. TORCELLO for example is weaved on a traditional handloom and then embroidered and finished using modern machines. The result is a vibrant textile testimony of today‘s India. Curtain: PRAINTED DESERT, Armchair Seating...

Open the catalog to page 13

BRIDGE BETWEEN YESTERDAY AND TOMORROW This beautiful design from 1919 was one of hundreds in the archive of the traditional printing house in North England we work with for the 2019 collection. We were looking for leaf prints since we decided to replace the typical flower design in order to open up new perspectives on Hodsoll McKenzie. And these leafs, some bright and some more of a shade, seemed to be exactly what we had in mind. Only all the otherele-ments of the design created an overwhelming behind-the-times opulence. So we decided to take them all off. By doing so we got caught by the...

Open the catalog to page 14

THE WOOLEN TOUCH AND THE COTTON PERFORMANCE The upholstery N E U T R A was born thanks to the idea of reproducing the effects and the typical softness of wool on a cotton fabric: more resistant, more comfortable and less delicate when used for upholstery. To reach this our North-Italian weaver has used a pure combed cotton for the warp to highlight the brilliance of the colors and the silkiness of the touch. The weft consists of a yarn entirely made of recycled fabrics. Italy is a pioneer in creating highly sophisticated recycling qualities that shows up the same performance as new yarns...