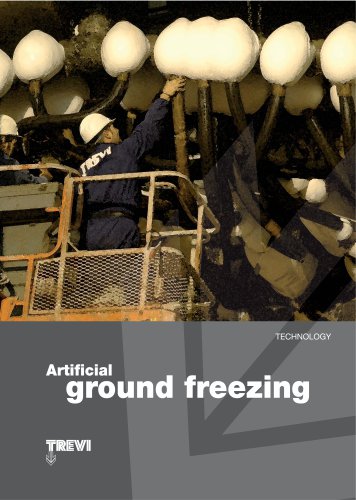 Thanks to the recent buy-out of Rodio and its know- how, the Trevi group proposes comprehensive services for every AGF project including: • Geotechnical, geognostic and hydrogeological • Analysis and evaluation of the most suitable method from a technical and economic point of view, by assessing various options and geometries; • Thermal analysis and sizing of frozen soil body, by defining the cooling power and the time needed to reach the requested thickness and temperatures. • Intervention execution, from the preliminary phases of drilling and installation of freeze pipes and thermometers,...

The AGF process involves freezing water within soil volumes, at a preset temperature, based on a known pattern, by extracting heat from the ground through special heat exchangers named freezing pipes. Soil cooling is obtained by circulating a low temperature liquid within the soil volume to consolidate: heat is Freezing alters the hydraulic properties of soil or rocks (making them watertight), as well as the mechanical features. The compressive strength of frozen soil varies according to soil or rock type and increases as temperature decreases. The values generally applied are between -5...

Ground freezing with liquid nitrogen Ground freezing with liquid nitrogen is especially suitable • short interventions • small volume (up to a few hundred cubic metres of Nitrogen is a non-toxic and non-flammable gas that Liquid nitrogen at a temperature of -196°C is pumped into the freezing pipes through the distribution system. Nitrogen gets "warmer" as it absorbs the heat from the ground and reaches the outlet of the freezing pipes through the return circuit, to be released to the atmosphere In addition to the refrigeration power resulting from change from liquid to gas state, the system...

Ground freezing with brine Scheme of brine refrigeration system Ground freezing with brine is especially suitable for the following applications: • long lasting projects requiring frozen ground to be maintained for more than one month; • large volumes of ground to be frozen - more than Brine (water solution of calcium chloride) is cooled to a temperature between -28 "C and -35 °C, by exchanging heat with the coolant inside the refrigeration system, usually ammonia or Freon. Brine is pumped into the freezing pipes through the delivery pipes. When flowing out of the freezing pipes, the...

Mixed nitrogen-brine freezing system The mixed nitrogen-brine freezing system combines the advantages of the two methods described above. By implementing some changes and replacing a few components, it is possible to use the same freezing pipes to circulate nitrogen first and brine later, or vice versa. These special pipes must not be subject to cold induced brittleness, as any leakage of brine from the freezing pipes - when performing brine freezing - causes soil contamination and hinders freezing. As a result materials with high resistance to cold induced brittleness suitable for...

Directional drilling Sacrificial borehole artificial magnetic field Final lining Frozen ground Freezing pipes To ensure homogeneous ground freezing, proper freeze pipe positioning is crucial. The pattern and distance between the pipes must be respected throughout the length of the same, which means no deviation beyond the design tolerances is admitted. To tackle the situations in which conventional drilling is risky or impossible, the Trevi group has designed and adopted the innovative directional drilling method TDDT (Trevi Directional Drilling Technology), based on the already known HDD...

To control ground freezing and maintenance stages, it is important to constantly monitor soil temperature variations over time. Temperatures are measured by thermometers placed inside drilled boreholes as long as the freezing pipes. The thermometers consist of a string of thermometers set at intervals of 3/5 m and placed along the contour of the frozen wall at known and measured positions. TREVI has specially developed a temperature measuring, display and management system. The monitoring data as well as any abnormal data are sent via Internet to the operators and technicians, to allow for...

Case History With the acquisition of Rodio, the Trevi group has also acquired the know how derived from a number of complex projects in which ground freezing proved to be a winning solution. Some of the major projects realized over the last few years are described below. SOPHIA SPOORTUNNEL (The Netherlands) The project envisaged the realisation of 14 cross passages between the two tunnels of the Betuweroute freight railway - diameter 8.65 m, length 4.240 m, drilled by TBM. The cross passages have been excavated from 7 service shafts positioned at 520 m distance from one another, by...

World leader in ground engineering, Trevi has been working for more than 50 years throughout the world, strengthening its ability to provide solutions to any ground engineering issues. Trevi works in the field of special foundation, soil consolidation, dam remedial works, tunnel construction and consolidation, marine works, rehabilitation and cleanup of contaminated sites and construction of underground automatic multi-storey car parks. Trevi is committed to continuous innovation and search for solutions to complex problems of civil engineering worldwide. Experimenting cutting-edge...