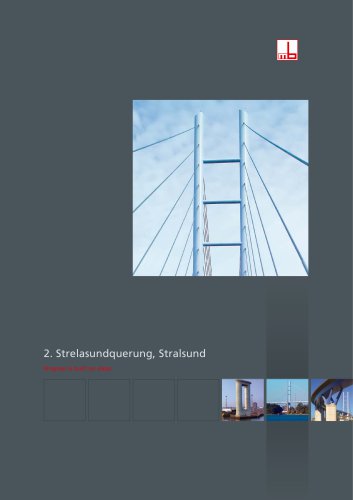 Spectacular fireworks display in the night sky above the Strelasund. Atmospheric lighting impressions on the inauguration of the 2nd Strelasund crossing

2. Strelasundquerung, Stralsund End of August 2004 was the official kick-off for the construction of the 2nd Strelasundquerung project totalling EUR 125m. More than three years on, in mid-October 2007, 300,000 people in Stralsund and Altefähr on the Isle of Rügen, celebrated completion of the cross- ing during a three-day folk festival including a spectacular fireworks display with a laser show. Since then, Germany’s longest road bridge connects – in parallel with the existing old dyke of Rügen – the Hanseatic city on the mainland with the Isle of Rügen. Following com- pletion of the Baltic...

“New Gate“ to Rügen In 1936 already, a firm connection between the town of Stralsund and the Isle of Rügen was created for the passenger vehicle and rail traffic. The only road connection between the mainland and the isle was not sufficient anymore, however. Particularly during the holiday months, the capacity of the two-lane Rügen dyke with some 18,000 passenger vehicles a day is exhausted. For the years 2010 until 2015, traffic forecasts assume up to 30,000 vehicles daily. Due to strong traffic volume, the 2nd Strelasund-querung was built as part of the approximately 54 km long new...

Architectural highlight of the Strelasund bridge is the 128 m high steel pylon of the Ziegelgraben bridge. Elegant bridge design The bridge construction, running 80 m in parallel with the existing Rügen dyke, consists of a total of six individual bridge structures in prestressed concrete, compound or steel construction design with individual lengths between 317 m and 584 m. The foreshore bridges of Stralsund, Dänholm and Strelasund as well as the Strelasund bridge belong to these individual structures which by means of equal design elements are combined to form a creative unit. A...

The Stralsund foreshore bridges (structure 1.1 and 1.2) swing in an elegant way – partly above existing housing construction – towards the strait. Drilled pile foundation under water superimposed load At the end of August 2004, the EUR 125m project was started with the manufacture of the first drilled pile by the Special Civil Engineering department of the Max Bögl group of companies. To secure the foundation, four huge drilled piles were built on site at various places using characteristic ground data and various sedimentation depth. After determination of jacket friction and peak...

Construction of the first pylon sections Transport of a bridge steel segment by means of a floating pontoon Substructures in a tight schedule The drilled pile head plates and substructures for the steel construction assembly were built in a tight schedule. Here the construction of the drop-shaped pylons in five different crosssections was particularly demanding. The pylons which are up to 40 m tall were installed by means of jacking formwork. This formwork was designed, joined and delivered by the proprietary concrete formwork department. What was also very challenging was the design of the...

Concise bridge steel building The central construction (structure 2) of the bridge is the 583.3 m long Ziegelgrabenbrücke with its 128 metres tall steel pylon and the harp-shaped angular rope suspension in two rope levels lying outside, for which 2 times 16 ropes made of parallel wire bundles of type DYNA GRIP DG-P 37 with 34 wires each were used. This type of rope was used for the first time with a big bridge in Germany. The 15 metres wide crosssection of the superstructure is designed as a orthotropic plate. The clear height is 42 metres above water level. Special consideration during the...

The prestressed concrete box girders of the foreshore bridge Dänholm are manufactured fieldwise using an overhead formwork carriage. Transport of the huge steel construction components took place from the location Sengenthal using heavy goods vehicles of the department transport and equipment. Foreshore areas The three-part bridge structure 3–5 with a total length of 1,604 m consisting of the foreshore bridges Dänholm and Strelasund as well as the actual Strelasund crossing was designed as prestressed concrete box girders in a hybrid construction way. For the superstructure building, an...

Aerial view of the 2nd Strelasund crossing: In the background, the superstructure of the Strelasund foreshore bridge approximates the dam structure in the area of Altefähr on the isle of Rügen. The cable-stayed bridge with its harp-shaped rope suspension bridges in an elegant way the Ziegelgraben and the harbour area in front of the Strahl shipyard.

Prime example of modern bridge building The new building of the 2nd Strelasund Crossing required in terms of execution particularly coordinated processes and building methods. All divisions and specialised departments of the Max Bögl group of companies worked hand in hand in order to manage the complex and technically demanding construction task in terms of quality, efficiency and on schedule. Moreover, the particular importance of Germany’s biggest bridge building was underlined because the project was taken up in the Federal Program of the European Fund for Regional Development and thus...