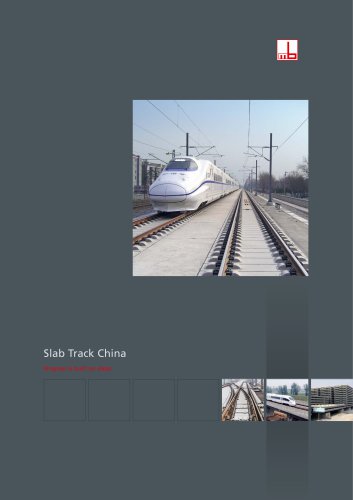 After successfully signing the contract in Beijing the official ground breaking ceremonies took place next to the track.

27 months of planning and construction, a distance of 115 km and only 30 minutes travelling time: With the grand opening and commissioning of the first high speed track between the metropolises Beijing and Tianjin, China heralded a new era for high speed tracks in railway construction at the beginning of August. In good time for the 2008 Olympic Games, the Slab Track Bögl ensures that passengers travelling by rail at speeds of up to 350 km/h need not relinquish highest comfort. The basis for the success of this project were the contracts signed mid November 2005 and mid May 2006 for the...

In six field factories pre-fabricated bridge girders with lengths from 20 to 32 m were produced. The foundation works within the test track area began in June 2005. The section consisted predominantly of a single span girder chains bridge construction instead of continuous girder bridges and earthworks. In order to achieve the required load carrying capacity and to reduce the settlements to a minimum, foundations in form of drilled piles, CFG – piles and pilling piles were required. Half a year later the technology transfer could be contractually expanded to a total distance of about 115 km...

Gantry cranes lifted tons of heavy bridge girders onto heavy load vehicles to be assembled later on site. A team of approximately 80 experts of the Max Bögl Group were responsible for geotechnical consulting, checking the design for the substructures and for the high quality with respect to design and execution of the Bögl precast slabs among others. Our specialized staff also planned the construction of two pre-fabricated plants and gave professional advice in construction and the equipment of the production plants in Beijinger suburbs Fangshan and Pinggu. Furthermore, the team of experts...

Settlement-sensitive alluvial deposits required the support of the track system on more than 100 km length. to the distributing function of the “continuous base layer”. Besides, the assembly of the Slab Track Bögl was even further accelerated, since it was possible to use mainly standard slabs. For the crossing of express highways, rivers and the new motorway to Shanghai three four-span girder bridges, 33 three-span girder bridges and altogether 16 single-span girder bridges were constructed with in-situ concrete. All the pre-fabricated parts of the bridges, together with the single-span...

Laying of the Bögl precast slabs with the help of a gantry crane Preparation of the grouting of the Bögl precast slabs Individual track sections with altogether 16 km total length were executed as earth structures – approximately 1 km of it in so-called supported construction method. They were built on 30 m long driven piles with 45 cm diameters or on 28 m long spiral in-situ concrete piles with a diameter of 40 cm. The deep foundation Switch parts and the rails were assembled directly on the Bögl switch parts (WTB). of the bridge construction, in contrast, consists of drilling piles with...

High speed switches at the YiZhuangs railway station year, approximately all 36.000 track supporting layers were assembled on a length of twice 115 km and the rails were laid. For the first time, sever­ al high speed switches were implemented with the Chinese partners, which likewise were assembled with the proven pre-fabricated component solution. The assembly pro- cedure at the Railway Station YiZhuang took place similarly to the standard system of the Slab Track Bögl: The switch support layers were laid, adjusted and grouted. Subsequently the switch rails and the switch parts were...

Essential for the success of the project is, apart from the most modern train technology, particularly the innovative track system technology of the Slab Track Bögl.

With up to 350 km/h en-route. The Chinese high speed train needs only 30 minutes for the approximately 115 km long track between Beijing and Tianjin. Due to extremely tight installation time schedule, enormous logistical efforts were faced by the Chinese construction firms in order to be present at several installation sites simultaneously. The laying of the Slab Track Bögl was made more difficult by the existent surrounding construction, so that the delivery over construction roads could not be ensured everywhere. The Max Bögl Group was also responsible for the execution of training...