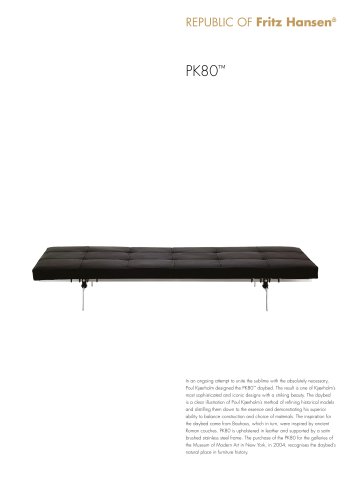 In an ongoing attempt to unite the sublime with the absolutely necessary, Poul Kjærholm designed the PK80™ daybed. The result is one of Kjærholm’s most sophisticated and iconic designs with a striking beauty. The daybed is a clear illustration of Poul Kjærholm’s method of refining historical models and distilling them down to the essence and demonstrating his superior ability to balance construction and choice of materials. The inspiration for the daybed came from Bauhaus, which in turn, were inspired by ancient Roman couches. PK80 is upholstered in leather and supported by a satin brushed stainless steel frame. The purchase of the PK80 for the galleries of the Museum of Modern Art in New York, in 2004, recognises the daybed’s natural place in furniture history.

Poul Kjærholm 1929-1980 Poul Kjærholm was a trained carpenter and continued his studies at the Danish School of Arts and Crafts. He had a particular interest in different construction materials; especially steel which he considered a natural material with the same artistic fineness as other natural materials. Kjærholm was first employed at Fritz Hansen for about a year, where he designed a number of noteworthy chair prototypes. In 1955 Poul Kjærholm initiated his collaboration with manufacturer Ejvind Kold Christensen, which lasted until Poul Kjærholm’s death in 1980. In 1982, Fritz Hansen...