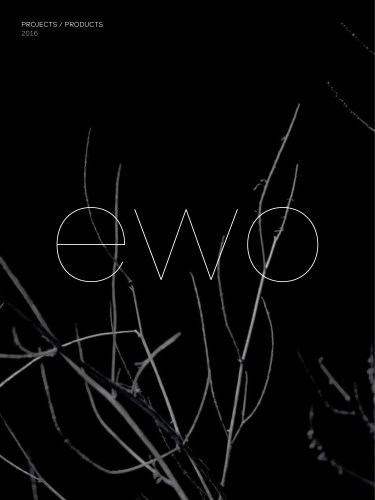 Public Space Architecture and the Arts Roads and Traffic There are few areas of public life in which the subject of security takes on such a critical posi­ tion as in air traffic. The lighting on the apron creates security if it provides its service without compromise, meets all standards, and is reli­ ­ able and durable. ewo is the forerunner in the use of LED tech­ nology for large areas and represents the high­ est standards in airports and logistics areas. The products have proven themselves for both smaller regional airports and for global hubs. They are so robust that they have been...

Munich Airport, Germany, 2012 This is the largest LED project at a German airport: all of the park positions at Terminal 1 are illuminated with floodlights from ewo. The energy savings compared to the predecessor system are around 57 percent.

Linz Airport, Austria, 2014 After Innsbruck, Linz was the second Austrian airport to be outfitted completely by ewo. We developed light panels that were 5.3 meters by 4.8 meters. For maintenance, they can be lowered from a height of 34 meters to ground level. Linz Airport

Hanover Airport, Germany, 2012 As the first airport in Germany to do so, the Hanover Airport replaced the c p ­ om­ lete apron illumination with LED technology. In addition to profitability and environmental protection, improved control possibilities and simpler maintenance were at the forefront for the operators. Hanover Airpor

Thule Air Base, Greenland, 2014 Reliable apron illumination in the extreme polar cold at the U.S.A.’s northernmost military base: the lamp control gear is changed in the hangar. It is connected to the panel radiators by means of heating cables.

Melbourne Airport, Australia, 2014–15 With 50 floodlights of the F32 model on six high mast systems, the first Australian airport is switching over to LED lighting. The functioning method of the system has been coordinated with the high ambient temperatures. Melbourne Airpor

Molo di Ponente, Venice, Italy, 2010 The illumination of the 90,000 square meter (22 acre) port terminal is a break­ through for ewo with the use of LED high masts in squares and extensive areas—and it has achieved energy savings of 80 percent. The finishes were s ­ pecially pretreated for use in salty air.

Open the catalog to page 13

Public Spaces Piazza San Marco, Venice, Italy, 2014 Within the sensitive setting of the World Heritage Site, the 13 F-Systems on the façades are barely noticeable. They illuminate the square evenly all the way to its center.

Open the catalog to page 16

ETH Campus (Swiss Federal Institute of Technology), Zurich, Switzerland, 2011 At the Hönggerberg campus, customized pole and bollard lights provide minimal lighting that has been intentionally reduced to the walkways. The perception of the night has been preserved.

Open the catalog to page 17

Unterer Stadtplatz, Kufstein, Austria, 2012 A new pedestrian mall, and a special production from ewo: precisely directed light produces the ground illumination in a downward direction. The globe a ­ ttachment on top diffusely distributes the brightness onto the surrounding buildings and brings the vertical dimension of the space into play. Unterer Stadtplatz

Open the catalog to page 18

Open the catalog to page 19

Urban Furniture, Up Series, since 2009 Up is a project by ewo and the Norwegian design collective Norway Says. The series encompasses light bollards, bicycle stands, trash receptacles, park benches, and other objects for the urban environment. From the basic form of the bollard, a variety of additional functions result through the openings, including illumination. Urban Furniture

Open the catalog to page 20

Via Tragara, Capri, Italy, 2011 The EL Series is completely integrated into the walls of the walkways. The light offers sufficient orientation, while the view of the landscape and the sea remains unhindered.

Open the catalog to page 21

St Martin Tower, Frankfurt am Main, Germany, 2015 The minimalist EL steles that radiate here on both sides turn into freely position­ able elements of design. They form a unit along with the building and its façade structure and also include elements of the intercom installation, a traffic light system, video cameras, and tank ventilation.

Open the catalog to page 22

Erl Festspielhaus, Tyrol, Austria, 2013 As a counterpoint to the sharp-edged architecture, we developed a discus-shaped housing that integrates a variety of lighting functions, such as an even and precisely ­ elimited ground illumination of the access road and a playful light-dark d rhythm on the parking areas.

Open the catalog to page 24

Villa Seligman, Frankfurt am Main, Germany, 2014 This lighting design had to be as detailed as the specifications for the building’s historical preservation. A housing variation that is set in the ground and other adaptations reduce the presence of the product to a minimum. XAL Competence Center, Graz, Austria, 2011–2013 Three minimalistic lighting variants form a single unified design. FA and EL supply every point with perfectly calculated light—on the surfaces and pathways in front of the building, and on the façade itself.

Open the catalog to page 25

Gradonna Mountain Resort, Kals, Austria, 2011–2013 Like the sustainable architecture, the lighting respectfully refers to the mountain landscape. In several processing steps, the steel girders receive a rustproof fi ­ nish, and the LED lenses are coated with an amber-colored lacquer for the s ­ pecial color of the light. Gradonna Mountain Resor

Open the catalog to page 26

All Ewo catalogs and technical brochures