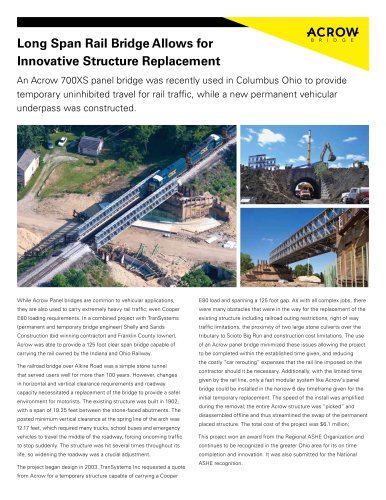 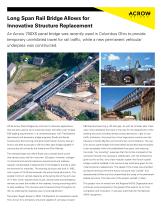 Long Span Rail Bridge Allows for Innovative Structure Replacement An Acrow 700XS panel bridge was recently used in Columbus Ohio to provide temporary uninhibited travel for rail traffic, while a new permanent vehicular underpass was constructed. While Acrow Panel bridges are common to vehicular applications, E80 load and spanning a 125 foot gap. As with all complex jobs, there they are also used to carry extremely heavy rail traffic; even Cooper were many obstacles that were in the way for the replacement of the E80 loading requirements. In a combined project with TranSystems existing structure including railroad outing restrictions, right of way (permanent and temporary bridge engineer) Shelly and Sands traffic limitations, the proximity of two large stone culverts over the Construction (bid winning contractor) and Franklin County (owner), tributary to Scioto Big Run and construction cost limitations. The use Acrow was able to provide a 125 foot clear span bridge capable of of an Acrow panel bridge minimized these issues allowing the project carrying the rail owned by the Indiana and Ohio Railway. to be completed within the established time given, and reducing The railroad bridge over Alkire Road was a simple stone tunnel that served users well for more than 100 years. However, changes in horizontal and vertical clearance requirements and roadway capacity necessitated a replacement of the bridge to provide a safer environment for motorists. The existing structure was built in 1902, with a span of 19.25 feet between the stone-faced abutments. The posted minimum vertical clearance at the spring line of the arch was 12.17 feet, which required many trucks, school buses and emergency the costly “car rerouting” expenses that the rail line imposed on the contractor should it be necessary. Additionally, with the limited time given by the rail line, only a fast modular system like Acrow’s panel bridge could be installed in the narrow 6 day timeframe given for the initial temporary replacement. The speed of the install was amplified during the removal; the entire Acrow structure was “picked” and disassembled offline and thus streamlined the swap of the permanent placed structure. The total cost of the project was $6.1 million; vehicles to travel the middle of the roadway, forcing oncoming traffic This project won an award from the Regional ASHE Organization and to stop suddenly. The structure was hit several times throughout its continues to be recognized in the greater Ohio area for its on time life, so widening the roadway was a crucial adjustment. completion and innovation. It was also submitted for the National The project began design in 2003. TranSystems Inc requested a quote from Acrow for a temporary structure capable of carrying a Cooper ASHE recog 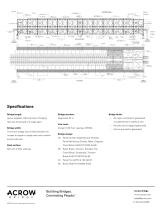