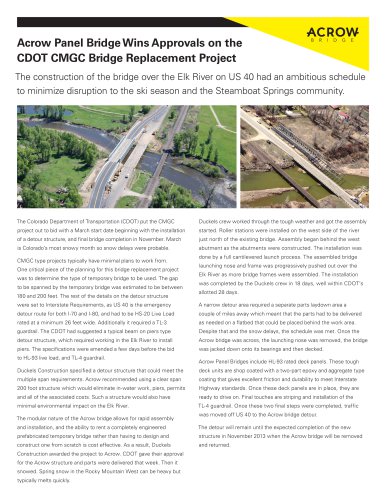 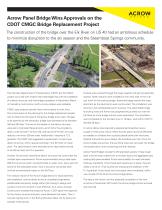 Acrow Panel Bridge Wins Approvals on the CDOT CMGC Bridge Replacement Project The construction of the bridge over the Elk River on US 40 had an ambitious schedule to minimize disruption to the ski season and the Steamboat Springs community. The Colorado Department of Transportation (CDOT) put the CMGC Duckels crew worked through the tough weather and got the assembly project out to bid with a March start date beginning with the installation started. Roller stations were installed on the west side of the river of a detour structure, and final bridge completion in November. March just north of the existing bridge. Assembly began behind the west is Colorado’s most snowy month so snow delays were probable. abutment as the abutments were constructed. The installation was CMGC type projects typically have minimal plans to work from. One critical piece of the planning for this bridge replacement project was to determine the type of temporary bridge to be used. The gap to be spanned by the temporary bridge was estimated to be between 180 and 200 feet. The rest of the details on the detour structure done by a full cantilevered launch process. The assembled bridge launching nose and frame was progressively pushed out over the Elk River as more bridge frames were assembled. The installation was completed by the Duckels crew in 18 days, well within CDOT’s allotted 28 days. were set to Interstate Requirements, as US 40 is the emergency A narrow detour area required a separate parts laydown area a detour route for both I-70 and I-80, and had to be HS-20 Live Load couple of miles away which meant that the parts had to be delivered rated at a minimum 26 feet wide. Additionally it required a TL-3 as needed on a flatbed that could be placed behind the work area. guardrail. The CDOT had suggested a typical beam on piers type Despite that and the snow delays, the schedule was met. Once the detour structure, which required working in the Elk River to install Acrow bridge was across, the launching nose was removed, the bridge piers. The specifications were amended a few days before the bid was jacked down onto its bearings and then decked. to HL-93 live load, and TL-4 guardrail. Acrow Panel Bridges include HL-93 rated deck panels. These tough Duckels Construction specified a detour structure that could meet the deck units are shop coated with a two-part epoxy and aggregate type multiple span requirements. Acrow recommended using a clear span coating that gives excellent friction and durability to meet Interstate 200 foot structure which would eliminate in-water work, piers, permits Highway standards. Once these deck panels are in place, they are and all of the associated costs. Such a structure would also have ready to drive on. Final touches are striping and installation of the minimal environmental impact on the Elk River. TL-4 guardrail. Once these two final steps were completed, traffic The modular nature of the Acrow bridge allows for rapid assembly was moved off US 40 to the Acrow bridge detour. and installation, and the ability to rent a completely engineered The detour will remain until the expected completion of the new prefabricated temporary bridge rather than having to design and structure in November 2013 when the Acrow bridge will be removed construct one from scratch is cost effective. As a result, Duckels Construction awarded the project to Acrow. CDOT gave their approval for the Acrow structure and parts were delivered that week. Then it snowed. Spring snow in the Rocky Mountain West can be heavy but typically melts quick 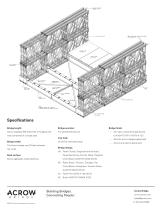