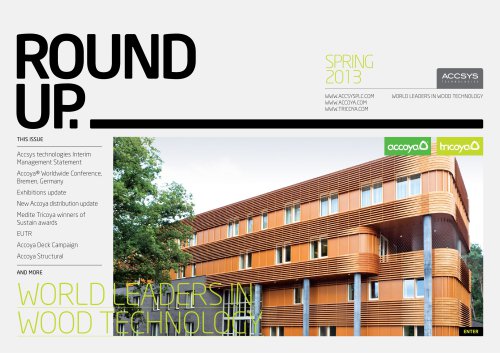 Accsys technologies Interim Management Statement Welcome to the Spring edition of Round Up. In February Accsys released its Interim Management Statement and the key highlights are shown opposite. As a business we have made solid progress in all areas and our joint venture with INEOS has started well, developing both existing and new opportunities. The progression made with the Rhodia licence agreement and the continuing success experienced by Accoya®, including sales growth, further industry awards and new distributors, provides confidence concerning our longer term objective of achieving...

Accoya Worldwide Conference, Bremen, Germany 10th to 12th September 2013 Following on from the successful 2012 Accoya® worldwide conference held in Windsor, UK during September, we are pleased to inform all Accoya distributors that the 3rd Annual Accoya Worldwide Conference event is to be held 10th through to 12th September, in Bremen, Germany. Accsys Technologies Sales Managers will contact each distributor in person to make arrangements and ensure a good attendance in Germany. There will also be numerous Accsys and Accoya presentations covering sales, marketing, new product development...

Exhibitions update Bouwbeurs Exhibition, Netherlands - February 2013 Infratech show, netherlands - January 2013 We recently exhibited at the Bouwbeurs show, in the Netherlands. Accoya® products, performance samples and an Accoya water tank test display were showcased along with a Medite Tricoya panel within a waterfall display. Haverslag, our Dutch distributor, recently exhibited at the Infratech Show the designated tradeshow for the entire civil engineering sector for Holland. The show took place at the Ahoy in Rotterdam, on the 15th -18th January. A stand, product displays and marketing...

Medite Tricoya winners of Sustain awards SEEKING SUSTAINABILITY, LOOK NO FURTHER THAN MEDITE TRICOYA The great and the green were loudly applauded at a sold-out awards ceremony in London, hosted by impressionist and actor Alistair McGowan and organised by Sustain Magazine. Medite Tricoya won the Product of the Year award based on its combined innovation and transparent sustainability. Now in its fifth year, the Sustain’ Magazine Awards for Sustainability, Business and the Built Environment are designed to celebrate the high hopes and hard work, commitment and creativity, radicalism and...

Accoya distribution update New distributors SÖGIN Iceland ToTEM is an established importer and distributor of high quality exotic woods specialising in tropical hardwoods from South America and Western Red Cedar from Canada and therefore Accoya® fits well within their product range. A privately owned company that operates out of a sales office and showroom in Prague and factory/ warehouse on the outskirts. Muenchinger has become an Accoya distributor covering Germany. They are a specialist importer and manufacturer of engineered components for the joinery industry. The Muenchinger family...

Accoya and Tricoya win top Dutch innovation awards from Houtwereld Accoya® and Tricoya have been named the Best Wood Innovation in Holland’s Houtwereld 2012 Top Suppliers Awards. The awards, now in their fifth year, celebrate commitment to quality and excellence within the timber industry. They recognised Accsys Technologies for its truly innovative approach to timber and wood based panels, as well as its pioneering technology. Marleen van Herwijnen Chief Editor of Houtwereld, explained “Accoya has triggered a revolution in the timber sector due, in part, to its superior quality and extreme...

New “Barefoot Friendly” Decking Range Launches in branches Across France Solvay have developed and launched a new Accoya® decking product in France. Under the new brand Accoya Deck a high performance Accoya deck board along with an attractive coating has been produced and will be available in selected Reseau Pro, Panofrance, Douet and Le Touze branches in France. A comprehensive marketing package including websites and in branch displays have been developed and launched to help promote the product. Click www.accoyadeck.com to see more details. The product offering includes decking boards in...

Carbon Footprint of Accoya Wood Outperforms Most Other Building Materials The world-leading environmental credentials of Accoya® wood have been further boosted through publication of an independent carbon footprint report. Updated cradle-to-gate analysis of the revolutionary modified wood by leading climate change consultancy Verco has shown that Accoya’s carbon footprint significantly outperforms most other building materials, including even a wide range of sustainablysourced hardwoods. Verco’s carbon footprint update available at http://www.accoya. com/wp-content/uploads/2013/01/...

Carbon Negative Accoya windows Featured in Restoration of 11 storey Residential Block Accoya® modified wood has been used in the restoration of a grade II listed building in the London Borough of Tower Hamlets. Carradale House, grade II listed residential tower block situated on a brownfield estate in Poplar, was designed by modernist architect Erno Goldfinger in 1963, before its completion in 1970. It is a striking example of brutalist architecture – a style which flourished throughout the 1950s – mid 1970s and spawned from the modernist architectural movement. The current refurbishment...

EUTR update Accsys Technologies supports for the new EU Timber Regulation, which tightens current laws, and seeks to eliminate illegal forestry and encourage sustainable forest management. With the Regulations enforced in March this year, the control of illegal timber trading a topical issue for the timber industry. Paul Clegg said the company is pleased to be able to support the proposed Regulations which are “set to add a great deal of credibility to the timber and logging industry.” “Much of the raw timber used by Accsys is harvested from New Zealand, where the government has taken...